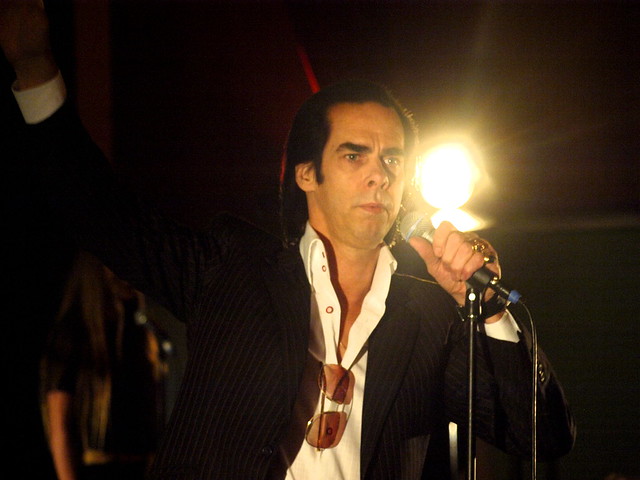 I am on a serious come-down, as I scrub tannin stains from the kitchen sink, mop up cat sick, urge Item to do her homework, and think back to Friday night's Nick Cave event. The very concept of the thing only bubbled up last weekend. Life didn't seem particularly dull before then, but I'm left feeling that I just don't have enough thrills on the horizon.

On the upside, I'll never forget it. In more than twenty years of living in Brighton, it feels like the ultimate in 'you really had to be there' moments. The clever thing about the contest was that it ensured that every member of the small crowd was there because they really wanted to be. For a pre-tour rehearsal, I imagine it's psychologically very positive to have a crowd of people who would be applauding even if you were standing there telling knock knock jokes, let alone playing them your brand new album.

There was a bit of a queue getting in, as they checked the tickets, and everyone queuing up on the desolate bit of Hove seafront, with a February chill wind whipping round sequinned mini-skirts and conspicuous cowboy hats, was smiling and happy. Afterwards, as we wandered out in a satisfied daze, there were even more smiles.

The crowd ended up being about 100 people, I reckon. A good few of them were, to my intense surprise, around the age of ten. I'd already told Item she couldn't be my plus-one: it had said in the competition details that it was strictly over-18s.

"Why? Is there swearing in the songs? Like Bloody Hell! Why did you do that?" - this was quite a good pastiche of a Bad Seeds song, I thought, and she's been singing it around the house ever since.

I took my friend Nat, who is also a fan, and she was SO pleased and excited that it really added to the atmosphere of the night. I've never been to any event in that particular venue before - it was at Hove's leisure centre, which is a Fifties brick building that has an old-school weight-lifting gym at one side, and a pool at the back where I used to take Item for baby swimming lessons. I'm sure the whole building was slated for demolition a few years back, and the pool got less and less fun to visit, as they stopped bothering to repair little things like falling tiles. Plus, it's always been a bit of an insult to the seafront - fancy building a squat little square building right in front of the sea like that, and not including any windows on the sea-facing side. I guess it's been given a reprieve in the light of budget cuts. Plans for the seafront always seem to be trumpeted and definite, and then reversed a few years later.

At the front of the leisure centre, I now discover, is a ballroom, a wood-panelled space about the size of your average church hall, with red curtains and circles of lamps hanging from the ceiling. I've seen Nick Cave live before, but in the city's biggest venue, the Brighton Centre, and I couldn't get closer than 20 feet away unless I wanted to really elbow through a moshpit. It was a good gig, but I left without any great feeling of connection - like many big events, you might as well have been watching on TV.

As we entered the ballroom, my overwhelming feeling was disbelief that we were going to see Cave playing live, and he'd be... well, just *there*, and even if we weren't in the front few rows, we'd be damn close. In fact, *everyone* was going to be in the first few rows. There weren't going to be any other rows.

I'm 44 years old, and this shouldn't be such a big deal, but - well, while I've left most obsessive fan behaviour behind, I've kind of stuck with my favourite musicians, and there really is only a handful of them. Nick Cave is the very favourite of the favourite. So, I spend a lot of time listening to his music, and a lot of time thinking about it - and him. Living in the same town helps with that, because someone's always just seen him around, or has an anecdote to share.

Almost everyone else in the audience was about our age, and I recognised a good many Brighton faces by sight: the woman who's always in the cafe at the Marina after the car boot sale; the Asian bloke who used to DJ when we were in our 20s (maybe he still does? I haven't been to a club in decades); the punk with two sticky-up wings of bright pink hair who writes for the Independent and always appears on those talking head programmes about music.

So, a nudge from Nat when the lights went down, and Nick walked on to the tiny elevated area of the stage, and the Bad Seeds walked on, and a cluster of girls stood looking awkward, squashed into a corner at the back, and the strings players sat behind the speaker stack, and Nick explained that this really was just a rehearsal and to bear with them, and 'if we were good', they'd play some old favourites, but first they were going to play the new album Push the Sky Away.

And that's what happened. Things went wrong a few times; Nick stopped things because he was 'really fucking off the note' or he'd forgotten the words. He told some small, self-mocking jokes just for Brightonians: "This one's called Jubilee Street. It's not about going to the library" (Jubilee street being the address of Brighton library); "This one's [Mermaids] about when I wrapped my car around a speed camera. Yeah, I'm a local hero, I know". And there was one [Wide Lovely Eyes] 'about Duke's Mound', the stretch of seafront just below Kemp Town, covered in bushes and winding paths, notoriously Brighton's gay cruising zone.

It's a lovely album, I think, on my hearings so far, and it's even better to be able to listen out to all the little Brighton references. [It's streaming here]

It seems we, the audience, were good, because after that, they went on to play some old stuff. He wasn't joking about 'old'. The set went:

A good number of these were songs I was listening to when I was a student, or even a sixth former. To be absolutely honest, if this had been my most perfect night ever, this section would have been made up of the far more melodious and beautiful love songs that are the real reason I am properly passionate about Cave's music. Ship Song and Love Letter are the closest things on this list; I enjoy the more raucous, discordant stuff mainly from nostalgia and because you can have a stomping good dance to them, but with the softer songs, you can enjoy Cave's voice, the lyrics - sometimes incredibly emotional; often comedic - and the songs' quite beautiful melodies.

Backing vocals were provided by the clump of young girls, around the age of twelve. Some looked starstruck, some looked bemused, and others looked really, really tired. Although it was hard to discern who was yawning and who was singing out with a perfect O shaped mouth. I'm guessing the other kids milling about in the audience and on the balcony were their siblings, or possibly offspring of the various band members and strings players. As the concert began, Nick had looked awkwardly at the choir and made a quip about how they 'weren't his'. At the end of the first part, the album comprehensively delivered, he said the kids had to go home because it was 'past their bedtime'. The two eldest stayed. I guess you would, wouldn't you.

I wasn't sure about the young girls singing backing vocals. To be fair, I was standing really near the speakers, and getting mainly distorted bass - so I couldn't tell what they were adding to the sound. As a mum, I found myself wondering about the wisdom of exposing them to the hard-talking, profanity-littered, sexually-explicit world of the Bad Seeds. I don't know.

Meanwhile, I'm kind of in awe of the sexual persona that a 55-year-old man can carve out for himself at an age when many men are slowly descending into a world of comfy cardis and excessive nasal hair. Looking at Warren Ellis (a sprightly 48, but sporting such a huge beard that he could be mistaken for an itinerant) and Conway Savage (52), I couldn't help thinking that they've created a new way for middle-aged to elderly men to behave. Perhaps it's just a path that all the big rock stars have already paved - tramplike suits, unkempt hair, stringy beards, shirts undone to the waist, big cuffs and collars, sunglasses on indoors, big droopy porno moustaches. Quite Seventies. Maybe that's why it makes 40-somethings' hearts skip a beat: it's the sex-symbolism that was the background to our teens and our own burgeoning sexualities.

I have begun to think that more and more of Cave's work (in his music and in his literature) is about the disturbing fact of being an old man who still has a young man's sexual desires, and how people look on that with mistrust. Maybe that's just my reading of it, and something that helps me come to terms with what otherwise just comes across as misogynistic. Like, oh, maybe it's IRONIC and SELF-DEPRECATING. That's ok, I can enjoy it then.

Certainly that seems to be the theme behind the Death of Bunny Munroe, Cave's most recent novel; the new single Jubilee Street's video shows Ray Winstone in a mac, uneasily employing the services of a young, pert, attractive prostitute. The truth of the matter is that a video like that ends up showing a young, nude woman, no matter what its underlying message is. And that adds to the heap of images of young, naked women that already exist. I suppose, as a middle aged, becoming less conventionally-attractive-by-the-day woman, it would be refreshing to see that trend bucked a little more; to see some more adventurous exploration of what sexuality can mean. Looking around the audience confirmed my gut feeling, that I'm well within a Cave fan's average demographic, so - if he was concerned with maximising profits, rather than following his very clearly-defined muse - he'd be best advised not to alienate us all.

But it was a wonderful night in any case. It was over before I could quite believe I was so lucky. I took about a zillion photos and filled my memory card; they're mostly under-exposed, but at least they provide me with a lasting memory of the night. 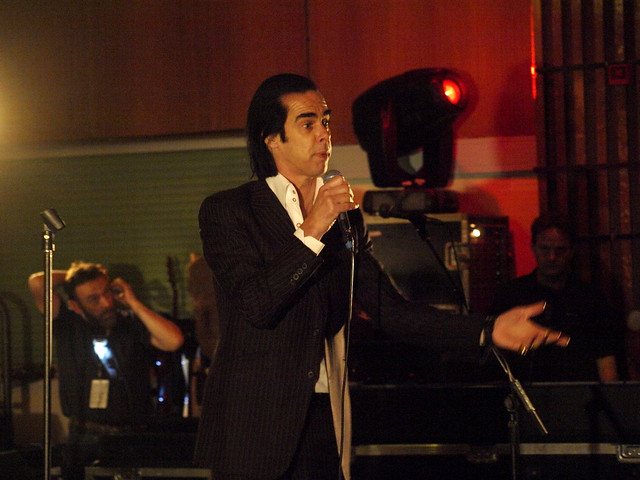 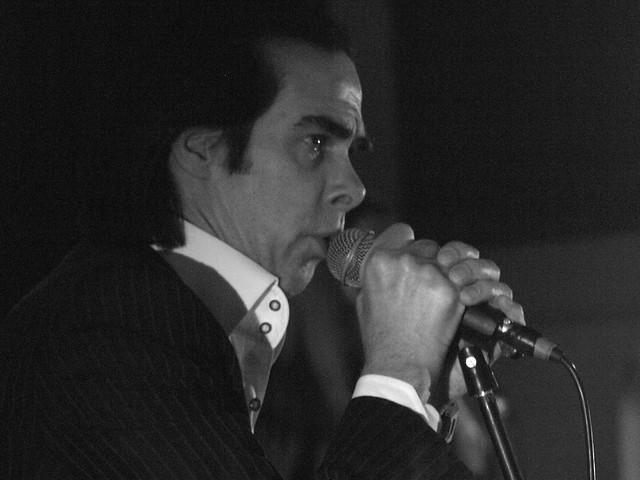 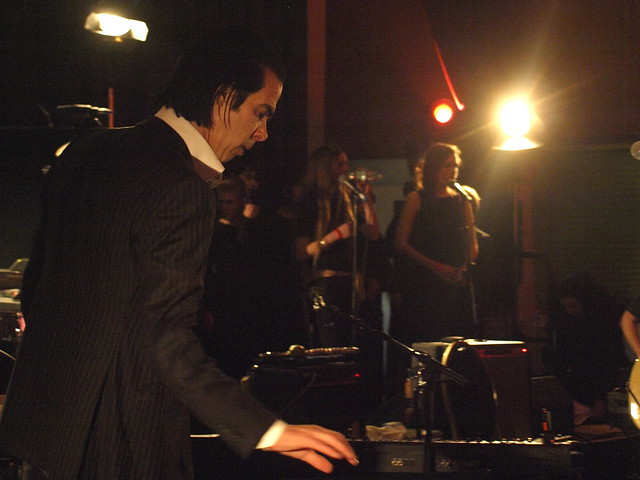 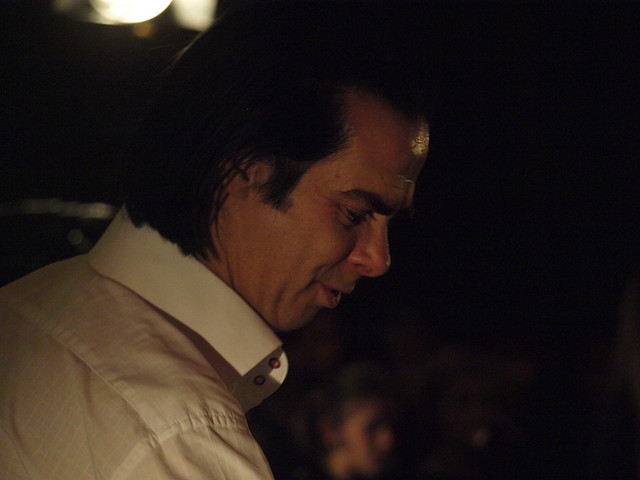 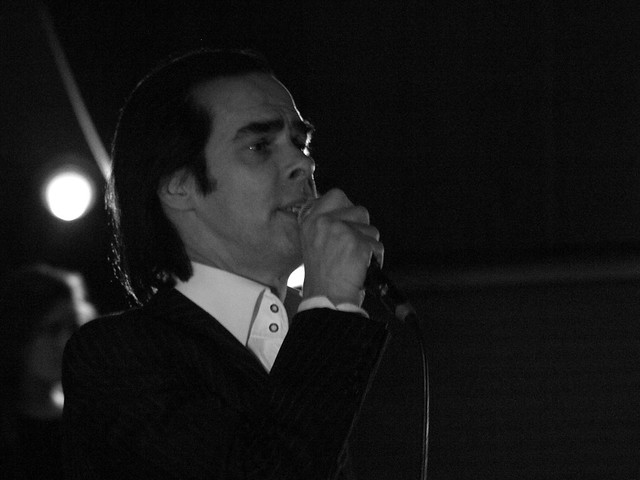 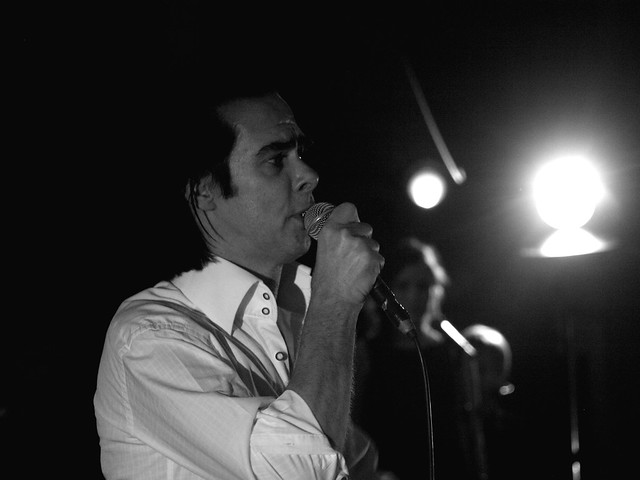