Disappointment at the dig 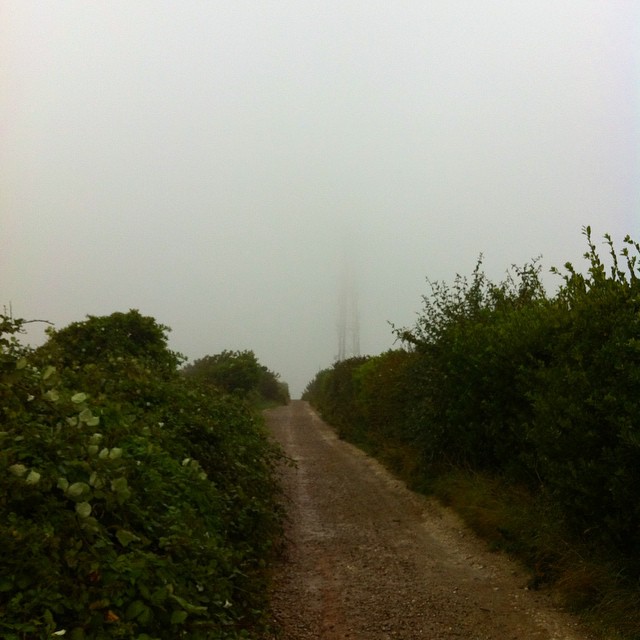 Bank Holiday Monday - of COURSE it's been tipping down all day.

Unfortunately, it's also the first of my scheduled two days on the Whitehawk archaeological dig. Above, the TV mast where we were supposed to meet at 9:20 this morning. Being an obedient type, I was there, along with several species of slug, most of them larger than I would find preferable, and all shades of tan, brown, and orange.

Rain isn't ideal for digs: it's not just that it's miserable for the participants; apparently it can also be bad for any artefacts, which can get squidged underfoot more easily. None of us could get an optimistic forecast for the day, even across the wide variety of weather apps on the assembled people's devices, and all activity was called off.

I'll try again tomorrow, though the forecast isn't looking much better, I've taken the day off work; if it is still pouring down, I might try to work anyway and swap for a day later in the week, though there are only four days left of the project.

One silver lining was that I got to have a cup of tea and a wider debriefing in the project portacabin. One thing I didn't realise about the project was that we (I say 'we', despite not having lifted a trowel yet) are deliberately not excavating the main area of the monument, and the reason is that they *know* there would be rich findings there - the budget of this project, and the quantity of volunteers, means that they actually wouldn't be able to process that quantity of stuff in a measured and coherent way, resulting in a published paper.

So, sensibly (or frustratingly, depending on how you look at it I guess), we are excavating in several small areas where geophysical surveys have suggested there may be man-made anomalies - extending knowledge of the actual formation of the monument. So far, it sounds like the findings have mainly been confirmations of negatives, that is, that this or that bank is actually a natural feature rather than, as was suspected, part of the monument. A few flint tools have been found, but not much else.

Jon went over the history that he'd covered in the recent meeting, but this time in more depth. As there were just a few of us, we were able to ask questions, and I was really interested to hear about some chalk 'artefacts' that apparently had no obvious use except to be decorative, marked with a crisscross pattern that has also been found on quarry walls near Worthing (I think I have got this right; however, I was not taking notes so this is from memory); and also the patterns, based on cereal crops, seen on some pottery.

One thing I found interesting was how little we actually know. There is plenty of extrapolation and an accepted story of both the monument's building, and the wider circumstances of man's living arrangements and provenance around that time, but it was so long ago and no-one can be sure.

I wanted to know what would have been at the centre of all these concentric rings - or perhaps there was nothing, I suggested, wondering whether it was only modern sensibilities that would expect a focus in the middle of such a set-up. There are various ideas, but no-one knows for sure. Perhaps ceremonies, or actions that leave no artefacts, took place there. Perhaps there was a wooden structure, which would certainly not have survived through the centuries.

Jon suggested that Neolithic man was the first to have made substantial changes to the landscape, and to have experienced the effects of them. After their arrival (across the sea from Europe, in small groups, with livestock, which is one of the things that blew my mind a little), it seems that they began quite widespread deforestation of the South Downs, which would previously have been covered in thick woods. As a result, the very deep topsoil at the hilltops would have been swept away by rains, leaving a much poorer chalk surface for farming.

He also said that the incomers were the ones to introduce the 'domestic', farming way of life to Britain (it was already quite established on the continent), and this could have had a marked effect on population numbers. People who stay put can have larger families than those who are always on the hunt, and the younger members can be put to work helping to grind corn, etc. (Here he paused to wonder which way of life is actually better, given that apparently skeletons have been found where the repetitive task of grinding has actually caused some damage).

Coming back to this project, more than anything is is to help raise awareness and to protect it. In the last 100 years, the spot has been used as quite a dumping ground; parts have been given over to allotments, which would have tilled over some Bronze Age barrows that are thought to be in the area. A road has been built over the centre; the racecourse is also over the top of it and, despite its protected status, people seem to have forgotten just where the parts that need protection are. Cars are allowed to park right on top of some of the site's central structures, and none of this can be doing the remains any good.

Wish me luck for tomorrow - although, apparently there are quite frequent digs all over Sussex that are open to the public via the Brighton and Hove Archaeological Society. For me, the trouble would be finding the time to commit - I can't help noticing how many of the participants are of retirement age - but I may well look into joining in, if my part in this dig comes to naught.