It began as one of those days where you wonder whether you did the right thing getting up at all.
Making the now traditional weekend pancakes, I opened the kitchen cupboard and a box of All Gold chocolates (given to us by Kathleen's mum in return for yesterday's babysitting - she always brings something, despite my protestations) tumbled into the mixture.

Well, they were easily fished out, but in the kerfuffle I started mixing the flour and sugar in with the egg white instead of the yolk, and THEN the washing machine started to bang really loudly intermittently, culminating in a series of loud crashes that set the dishes on the draining rack directly above it clattering, brought down the front of the boiler, propelled the machine half way across the (admittedly small) kitchen, and finally, tripped the electricity. Almost simultaneously the stove-top coffee-maker overflowed into the pancake oil, inexplicably (to me, anyway) causing large flames to shoot upwards.

Item asked, at this point, if I would varnish her nails*.

Today it was Car-Free Brighton day again. We went last year and loved it (OMG, how small does Item look in that entry?): I suspect it was slightly less thrilling to us this year in part because we had high expectations, whereas last year it was all a total surprise. It was packed, though, which kind of spoiled the message of how wonderful it would be if there were no cars on the road, and gave the impression that you'd just be wading through densely-packed walking bodies.

(All photos from this year here)

Also, we arrived about 90 minutes after it had begun (it was from 12-5), and there were no 'activity bags' left for the kids. This was a bit of an issue, as it transpired that the idea was, you visited a string of stalls along Ship Street, using the materials in your bag for each one. Only two of them were now accessible to us, but to be fair, Ites did have a good time making a bird out of scrap cardboard and sticky paper, and a shaker out of an empty bottle and pasta. I overheard one of the organisers saying they'd had 200 bags, which you only had to look around to realise wasn't enough... I know I sound like a right old harpy, and the organisers probably didn't appreciate my sour face, but when it's your own child being disappointed, it does kind of whip up an inner fury, right or wrong. (Actually, Item obviously didn't care. BUT SHE MIGHT HAVE, ha ha).

More positively, the 'enchanted forest' was really nice - someone had worked really hard on that. 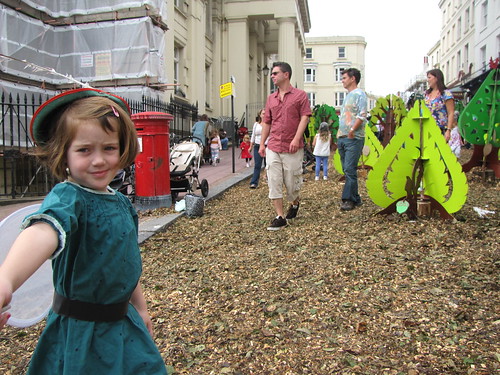 This is the road leading up to the town hall. ( Collapse )

Today I am sick of Freecycle. I completely endorse its principles, and time and time again I am peeved by its actuality.